A lot of distortion occurs when the earth is projected onto a flat surface, for instance, a map using the Mercator Projection. Because of this distortion, if you plot two points on a flat map along with the corresponding calculated midpoint, you will find that the midpoint is often far out of alignment with the two points. This can be easily illustrated by an example. If you place a ruler on a flat wall map between the San Diego Zoo in California and the Central Park Zoo in New York, the midpoint for the two cities will appear to be in the northwest part of Oklahoma. However, the calculated midpoint gives the true coordinates of N38° 45.752 W096° 44.934 which is in northwest Kansas. You can verify this by stretching a string between the two cities on a world globe. See example below.

In general, a true midpoint in the Northern Hemisphere will be farther north than you might expect it to be when viewed on a flat map, and conversely, a true midpoint in the Southern Hemisphere will be farther south than you might expect it to be. For cities that are close together this apparent difference between a spherical earth and a flat map is only slight, but the difference can be great for cities with a lot of longitude separation, such as cities on different continents. Also, there tends to be more distortion in the polar regions than near the equator. So if your calculated midpoint is farther north than you expect it to be, this is the explanation. Usually, if you take a look at a world globe it will begin to make sense. 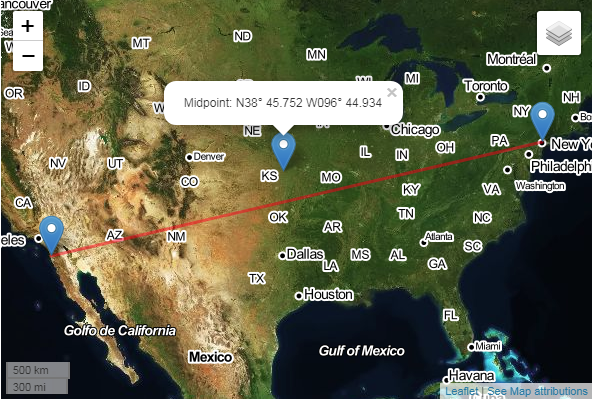